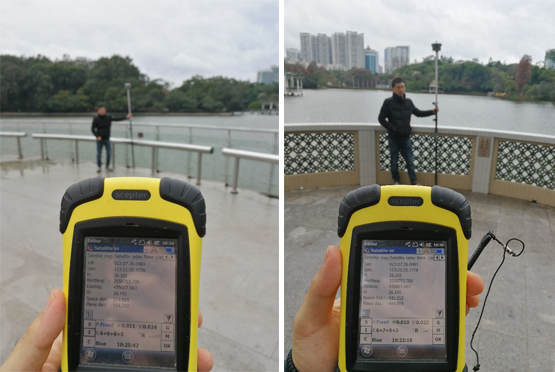 Control points anywhereIt has been a couple of years since every brands talked about the L-band technology. But the high price always stopping the users to move on. Now with the rapid development of the technology, it becomes more and more popular in the survey market. In the beginning of 2018, SOUTH will release the new G1 PLUS which equipped with this new technology. AS well, the G6 has been already tested RTX for a long time in domestic and overseas.RTX is a premier worldwide correction service which can provide accuracy better than 4cm via satellites straightly or cellular within less than 20mins. With it, SOUTH realizes to set the control points anywhere. The receivers with this technology only can be worked as rover ever since many manufactures brought it up. Now SOUTH becomes the first one to make it as base. Once the receiver achieved the accurate coordinate, it can be transmitted as control points. So that’s why we say the control points are anywhere. Compare to the other L-band technologies, RTX also obtains a good result no matter in the time or accuracy. Here are some test results compare to one of the other brand.

The other brand RTX test

In these years, all Chinese manufactures reached a great achievement because of the Beidou satellite system, especially SOUTH. SOUTH is the first one to promote Beidou in the surveying instrument market and apply it into our products. Because of Beidou, SOUTH has the chance to refresh 90% reference stations in china. Because of Beidou, SOUTH took the opportunity to update reference stations in Hong Kong. Because of Beidou, SOUTH seizes the chance to make the instruments accuracy more accurate and instruments more popular.We all know the more satellites bring better accuracy. Now, with the rise of Galileo system, SOUTH does believe it will become a new hit point in the market. So, months ago, both SOUTH reference station and RTK completely support Galileo satellites. Besides, SOUTH R&D group also made a specify differential format which contains Galileo signal.